“The plan looks great,” said James. “Really, it does. Strong numbers. The creative’s on point. This is absolutely the direction we want to go.”

Eight of us were on the call. Five from James’ team (not his real name). We’d been working the deal since January. Two months later — with specifics nailed down — the plan was to meet up in NYC, ink it, and push go.

That meeting was scheduled for Tuesday, March 17th.

Instead, we postponed. Another month-and-a-half later — with I don’t know how many more emails, decks, phone calls, and texts — there was James, pausing. Followed by, “Let’s come back to this in June.”

My heart broke. And a single refrain stuck in my throat: Swing, James. Just swing.

“The world is changing very fast. Big will not beat small anymore. It will be the fast beating the slow.”

Today, we live between two worlds: before pandemic and after.

In the US, 25+ million people are unemployed. Retail sales have been hit with the largest MoM decline in 30 years. Oil is underwater. And the stock market saw its greatest single-day drop in our nation’s history.

A different divide, however, marks my world: inside Common Thread Collective and beyond it.

Amidst the turmoil, online retail has seen its modest expansion suddenly sent into overdrive. At the end of 2019, ecommerce represented ~11.4% of US retail sales.

According to some reports, that number has increased by as much as 50%. In some cases, smashing it. Far from an anomaly, that sort of data has been confirmed by email providers, 3PLs, marketplaces, credit card companies, and even platforms:

As we help thousands of businesses to move online, our platform is now handling Black Friday level traffic every day!

It won’t be long before traffic has doubled or more.

Our merchants aren’t stopping, neither are we. We need

559 people are talking about this

Despite this shift, many owners still find themselves paralyized by uncertainty.

We’re analytical here at CTC. Maybe to a fault. When faced with uncertainty, we turn to the numbers.

The problem with COVID-19 is that it’s utterly unique. Under the weight of singularity, our usual models and data crumble — decimating our mirage of control. The unknown unknowns haunt us, driving us back (yet again) to seek refuge in data.

Down and down we go until any decision, any course of action, any new movement feels dangerous … even foolish. Worse, that paralyzing cycle only intensifies for businesses who aren’t experiencing the effects of “rising tides.”

What do we do in a world that’s so brutally exposed our unknowing? We stop predicting and start acting. We swing.

“Coronavirus marks the start of a new future,” Ray Dalio recently proclaimed. For ecommerce brands, three realities shaped that future. Each one shouting …

To wait is to miss the most pivotal moment our industry may ever experience.

In the midst of upheaval, swapping out your deodorant doesn’t seem that dramatic. Why? Because nearly half of our behaviors are attributable to habit.

When habits break, long-held behaviors break with them.

Does our new life with COVID-19 qualify as a life-changing event that shapes consumer habits? Millions of “unreached” internet users are venturing into digital activities for the first time. This is especially true for new online customers, with undeclared digital loyalties.

Having signaled the intent to move more of their shopping online — and done so — for many, the change will stick. The battle is for a new, potentially loyal class of consumers who will be seeking a frictionless welcome to a new series of behaviors.

In the past, this may not have been as big of an opportunity for DTC. What’s different? In his article “COVID and forced experiments,” Benedict Evan’s explains:

“In ‘normal,’ steady-state growth, the default choices and the incumbent companies soak up most of the new use, unless you carve out some radically new market (such as Warby Parker).

“But when the incumbents are swamped and everyone is frantically trying everything, it may be easier for new voices to be heard. Again — the market is being reset.”

Left behind in this pursuit will be many consumer product giants (P&G, General Mills, Unilever, etc.). Having withheld entry into ecommerce for fear of “channel conflict” and apathy created by the assumption that it’s a small victory to be won, legacy manufacturers lack the ability to move with the speed of DTC.

Move being the operative word.

2. Acquisition Is Cheap, But It Won’t Stay Underpriced

“I fucked up. There’s moments when the beachfront property is available. Then, it’s not.”

Two years ago, Gary Vee came to speak at CTC and brashly shared this warning regarding the price of Facebook Advertising:

2 years ago @garyvee stopped by @CommnThreadCo to chat with our company.

His message was clear. FB is underpriced and you are going to regret not maximizing the moment.

Well, you are getting a second chance. Don’t miss now. 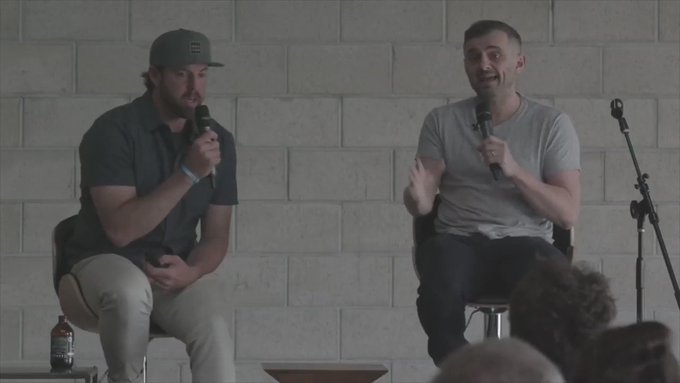 The idea that the cost of the “Malibu” real estate of Facebook and Instagram was going to continue up and to the right was a prediction most shared.

Then coronavirus struck and enterprises with massive ad dollars pulled spending in droves. In total, Facebook and Google could lose over $44 billion.

The price of ad inventory reflects it.

Comparing Mar. 1-7 (the week before quarantine began) with Mar. 8 and beyond, shows an aggregate reduction of -26.79% in CPM. Still, this is an auction-based marketplace. The price will rise again.

In fact, they are. Here’s the same data set, this time starting from Mar. 18 — exactly one week after the day the NBA canceled its season. To prove to you how strongly we believe this, here’s a map of spending on our own brand Bambu Earth over the past four months: This increase has not been created based on a sudden newfound efficiency: our ROAS is currently about equal to the result in Mar.

We know something very important about Bambu Earth customers. They increase in value 30% within 60 days and 100% within a year.

This isn’t the window to worry about 30-day profitability because the window will close on these prices and we will have to scale back our acquisition.

Customers create revenue for a lifetime. Don’t forget that.

3. The Spoils of Victory Will Be Greater Than Ever Before

“These spring months will prepare communities but the autumn will define us. What was once a layer atop of society, will become its core functionality. That’s what you’ll see when the dust finally settles.”

In 2003, China experienced an outbreak of SARS that provides a parallel for the potential stakes that may be available for winners in Dalio’s “new future.” Web Smith highlights the outbreak’s impact on ecommerce penetration:

“Just 17 years later and China’s online retail economy is the envy of the world. At nearly 37% penetration and growing, analysts estimate that the rate will reach 63.9% by 2023.” Pre-COVID, the US hadn’t experienced anything close to that.

What percent can we expect ecommerce to represent going forward?

Alongside Bank of America’s internal data, which puts the current increase of “online retail” at ~50%, data we compiled from as many sources as we could find, place the total increase at roughly the same number: +52.20% As for total percent …

By opening the economy, we are guaranteed to see a 25%+ eCommerce penetration rate by September 2020.

Conservative projections didn’t have us exceeding 25% for another 8-10 years.

25 people are talking about this

Wherever you go to gather your opinion, you’ll be hard-pressed to find positions that entail ecommerce going backward. If there’s anything we know about our country it is that — like the NYSE or NASDAQ — retail sales volume moves up and to the right in the long term.

In a future with US retail at 25% ecommerce transactions the victories of “market leaders” will be massively larger than anything before.

While you battle short term profitability — and don’t get me wrong we deeply understand the limitations of cash flow — consider this future. And consider what short term P&L battles you are willing to concede to take hold of the spoils of the larger war.

If you’ve made it this far, you carry the burden of responsibility.

You can choose to ignore me or go a different route. The thing you can’t do is pretend you didn’t know. When Facebook prices rise or you see a competitor launch that incredible campaign or product perfectly built for the moment.

You know the feeling that will come…

It’s the feeling that I didn’t act. I didn’t seize the moment. It’s a different feeling than failing. It’s worse.

Gather every bit of information you can … and swing.

If you want help from a partner who is working every day to help their clients transform their future and achieve their dreams, reach out. We would love to be a part of your story.

So, to my indecisive and maybe-some-day client James, I offer this … a poem from Marguerite Wilkinson.

As you read it, consider the tragic end to Wilkinson’s life. After suffering a nervous breakdown she took up swimming as a means of coping with her anxiety. In the winter of that year, she drowned at Coney Island.

Swing, James. Swing. There’s only one other path to take.

I never cut my neighbor’s throat;

My neighbor’s gold I never stole;

I never spoiled his house and land;

But God have mercy on my soul!

For I am haunted night and day

By all the deeds I have not done;

This article originally appeared in the Common Thread Collective Blog and has been published here with permission. Fast-Tracking The Future of Commerce: A Recap of Shopify Reunite Aaron is the VP of Marketing at CTC. Previously the Editor in Chief of Shopify Plus, his content has appeared on Forbes, Mashable, Entrepreneur, Business Insider, The New York Times, and more. Connect with Aaron on Twitter or LinkedIn (especially if you want to talk about bunnies or #LetsGetRejected).

Fast Or Feature-Rich: Can You Have Both?
Nik Sharma’s Playbook For Launching A DTC Brand
Comment

Fast-Tracking The Future of Commerce: A Recap of Shopify Reunite

Fast Or Feature-Rich: Can You Have Both?