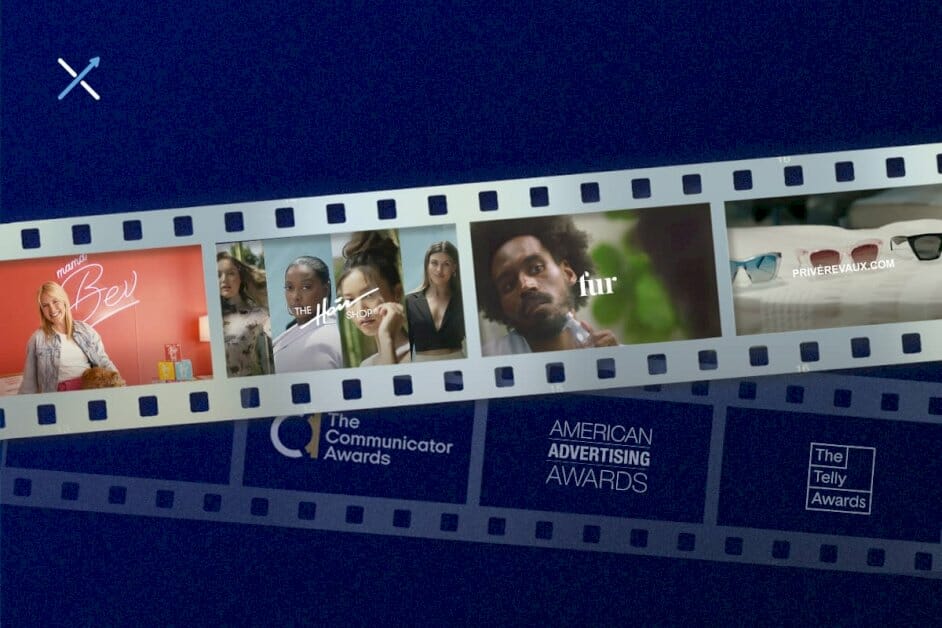 As Good As Gold: 5 Production Tips to Winning the Industry’s Most-Coveted Ad Awards

This past creative awards season, MuteSix’s in-house Enterprise Production team took home a grand total of 10 of the most prestigious, industry-renowned trophies on behalf of six valued brands, including Bev, Fur, Big Fig, The Hair Shop, Privé Revaux, and CarGurus.

Adding to our growing, hard-earned collection were silver and bronze LA Advertising Awards (LA Addys), one gold and three silver Telly Awards, as well as an Award of Excellence and three Awards of Distinction at the Communicator Awards.

Trophies aside, for MuteSix, the goal for 2022 was–above all else–pushing the envelope to churn out breakthrough creative for brands competing in some of the most crowded verticals, while disrupting their respective category and driving record-breaking business success.

While MuteSix was armed to combat the “all-time-high” competition to which they’ve grown accustomed over the past several years, the creative studio also had to overcome a few unique hurdles in 2022, putting Enterprise Production talent to the test–with winning results.

With the unstoppable force that is TikTok disrupting the world of viral video content as we now know it, the Enterprise Production team tasked themselves with adopting the booming platform’s signature native content style and trends across the board.

Even for our higher-production-value content for Connected TV and YouTube, the team wanted our higher-budget branded content to feel fresh and internet-native. While still polished, highly stylized, and brand-forward, the team played with the newer Paid Social trends that have become increasingly harder to ignore even in the world of big-budget production.

“In the studio, we leaned heavily into recognizable native trends–from fast-paced transitions and text-to-speech bot narration, to custom music production and other tools optimized for a sound-on environment. That’s because for the first time ever, TikTok really played a starring role in our high-budget studio productions,” explains Alexa Prosniewski, Executive Creative Producer at MuteSix.

Of note, pacing, which has greatly sped up in order to satisfy shorter attention spans, changed dramatically this year. “Even with our 30-second spots for CTV,  we picked up the pace, added more transitions, and ideated snappier narratives to entertain short-attention-spanned audiences, knowing they include the one-billion-plus TikTok users who consume over 24 hours of content a month,” says Olivia Kelleher, VP of Creative at MuteSix.

With so much fear, sadness, and overall negativity building up after the pandemic and other world news, positivity has been a top trend for the MuteSix team in 2021 and 2022–and it takes centerstage throughout all production.

This past couple of years, everyone–from the MuteSix creative team and production crew, to the talent and clients–shared the same goal: to create a stellar final product that not only engages audiences but uplifts them.

As seen throughout all of MuteSix’s award-winning spots and explained by Prosniewski, “Pumping up the positivity and passion throughout the production process proved to be a huge driver behind the success of our creative for brands across nearly every shopping vertical.”

Thanks to TikTok and other major Paid Social channels where branded content is consumed faster than brands can create it, production has become a “volume game” as Kelleher calls it.

In order to mimic TikTok content’s ability to build brand awareness and boost acquisition, the name of the production game this year was repetition and high-volume content.

“During our bigger shoots, we filmed as much footage as possible–capturing different hooks, showcasing various products, and testing any and all trends so that when it came time for testing, we were able to up our chances of solving the winning creative formula, then easily iterate upon it for a steady stream of strong upper-funnel content.”

According to Kelleher, even on production day for big shoots for Connected TV and YouTube, the team had a dedicated crew shooting on cell phones, borrowing talent while they were in hair and makeup, and stealing them away to create UGC that mimics thumb-stopping TikToks.

“By having two different crews and experimenting with alternate production styles on set–while sharing brand-aligned talent, wardrobe, and location,” explains Kelleher, “our team was able to shoot reels and reels of footage in various styles more appropropriate for the major social channels.”

Given the signal loss that comes with iOS 14, brands were unable to benefit from advanced targeting like they had prior to the late-2021 software drops, forcing brands to to focus more on differentiating themselves and leaving a lasting impact on broader audiences.

“Memory and recall are crucial for top-of-funnel success, and understanding this gave us the green light to really think outside of the box and push boundaries,” explains Kelleher.

And, while innovative thinking is nothing new in the world of branded content, it took on a whole new meaning for even the most traditional of formats.

“For your standard direct-to-camera testimonial, for example, we had to really consider how we could up the impact ante for the sake of enhancing brand recall and full-funnel engagement to combat the limitations that come with less targeting capabilities,” shares Kelleher.

Taking major national campaigns and high-production-value broadcast spots head on, MuteSix turned ads into awards by introducing our signature element of humanity–in addition to high-value entertainment–into our winning spots, a strategy the team credits for our competitive edge.

With a deep understanding of our brands and an equally strong grasp on what their audiences love about them, MuteSix set out to connect with each audience segment’s values rather than erring on the side of overall cinematic perfection like other awards show contenders.

“While this year’s competitors had beautiful stories to tell, we leveraged our customer data to tell stories that we knew our brands’ audiences wanted to hear,” says Kelleher.

Connecting with audiences’ values was tantamount for the Enterprise Production team. According to Kelleher, “We did this by honing in on our scripting and our concepting, and having both inform all of our visual elements so that we created work tailored to the viewers who we know are really interacting with a given brand.”

Because of our deep customer segmentation insights, MuteSix focused on addressing customers’ values and telling relatable stories as much as possible, hoping to make each viewer feel as though a brand’s ad was created directly for them–as opposed to your typical wide-reaching broadcast spot produced for the masses.

For a behind-the-scenes look at each of MuteSix’s winning spots, read on to see how our Enterprise Production team implemented each of these five tips to turn ads into awards (sound on!).

As a female-owned brand revolutionizing drinking culture for a predominantly female audience, MuteSix opted for (not so G-rated) humor, levity, and relatability to celebrate the ethos of the beverage brand in a digestible, approachable, and entertaining way.

For The Hair Shop, MuteSix infused elements of fun, flair, and fashion to squash the taboo of wearing hair extensions, and instead spotlight the freedom everyday women have to switch up their look as often as they do their mood, destination, or outfit.

Focusing on a bold production design, vibrant wardrobe, hair and makeup, as well as upbeat vibes, MuteSix showcased Fur in a way that felt on-brand yet eye-catching enough to set the premium razor brand apart from their less-edgy competitors.

For Jamie Foxx’s line of stylish yet affordable eyewear, MuteSix captured the ease and fun of switching up your sunglasses to complement your style by showcasing the versatility and breadth of the brand’s styles, as well as the “cool factor” of the customers wearing them.

For brands looking to take their high-budget branded content to the next level across Paid Media channels and screens both big and small, reach out to our in-house, award-winning Enterprise Production team today.