Since you’re on the internet right now, we’re going to assume you’ve seen your fair share of advertisements in the recent past.

Whether we’re talking about ads on Google, Facebook, or any other platform, there’s a reason they’re so prevalent:

Of course, this doesn’t mean that Facebook and Google Ads are inherently attractive and engaging. Needless to say, a poorly-created ad isn’t going to generate nearly as much business as a strategically solid one.

In this article, we’re going to focus on one of the most impactful aspects of Google and Facebook ads, regardless of format:

Six Tips for Writing Killer Ads on Facebook and Google

Creating your ad copy in a haphazard manner will almost certainly cause you to fall short of your intended goals in terms of engaging and converting your audience.

That said, let’s discuss some overarching best practices to keep in mind as you write your next ads on Facebook, Google, and other such platforms.

Without further ado, let’s dig in.

Keep Your Message Simple and Straightforward

You don’t have all that much room to write when creating text ads on Google or Facebook.

On Google’s side of things, the following character limits apply: On Facebook, character limit varies depending on ad format. In most cases, headlines must be under 25 characters, ad body under 125, and link descriptions under 30.

(Note: Technically, Facebook allows more than 125 single-byte characters—but your ad copy may be truncated as needed if you go over this limit.)

In addition to these technical confines, you want to keep your target audience’s expectations in mind as well.

The goal is to create ad copy that is both economic and efficient. In other words, try to get your message across using the exact amount of words necessary to do so—no more, and no less.

Take a look at the following ad:

That’s a lot of info—in a relatively small amount of space.

Note that JoS doesn’t beat around the bush here. For example, instead of saying “buy one item, get one free,” the ad simply promotes the company’s “BOGO Deals.”

(Since we’re nitpicking on economic word usage, it’s worth pointing out that “Free Shipping Offer” and “In Store Pick-Up” communicate messages that the ad had already stated. To be sure, JoS could have put this space to better use.)

To illustrate the impact of conciseness in your ads, take a look at this example from GoPro: The message is clear: those looking to upgrade to the newest model of GoPro can do so with ease—and save $100 in the process.

The point is, while you do want to take full advantage of the space provided, you shouldn’t necessarily use all this space just because you can. Focus on communicating the message that your audience wants to hear—and allow them to take the next step without having to read a bunch of fluff.

Use Attractive and Engaging Power Words

Piggybacking off the previous point, it’s vital that your ad copy include certain “power words” to entice your target audience.

Keep in mind that you’re writing not to promote your products or brand—but to show your audience the value your brand will have on their lives. For that reason, your ads should include audience-facing language.

For example, note how both of the following ads start with a focus on “your” issue:

It’s also a good idea to instill a sense of safety and risk-aversion through your ads. This typically involves using language revolving around free trials and demos, discounts, and other such offers:

In the above example, words and phrases like “guaranteed,” “no subscription needed,” and “start a trial” all serve to show the consumer they have nothing to lose by giving Harry’s razors a shot.

You also want to do whatever you can to get your audience to act immediately. In terms of power words, this means using phrases such as “Buy Now”:

One thing to note in these examples:

The use of power words and promotional phrases does not mean the overuse of them. While the purpose of any advertisement is to sell something, there’s a fine line between “promotional” and “salesy.”

Okay, the above heading is a bit loaded in meaning, so let’s start by clarifying:

The last thing you want is for your target audience to notice your ad… but be totally unaffected by it. In fact, this may be worse than having them completely overlook your ad in the first place; in this situation, at least their opinion is nil (rather than disappointed).

That said, it’s much better for your ads to convey a positive or uplifting message. However, note that “positive” and “uplifting” doesn’t mean over-the-top fluffy. But it does mean spinning a neutral (or even negative) situation into a positive:

This ad doesn’t use scare tactics to get patients to click through. Rather, it instills a sense of complexity—layered on top of security—to prove that patients are in good hands at Fox Chase’s Medical Center. Still: it’s definitely not a “feel good” ad, by any stretch.

That, right there, is the point:

Your ads should meet your target audience where they are mood-wise—be it positive, negative, or neutral—and promote the idea of “something better” on the other side of their engagement with your brand.

Use Punctuation, Symbols, and Numbers Strategically (and Sparingly)

While punctuation, symbols, and numerals are, of course, three separate things, we’re going to group them together here because the takeaway for using each is the same:

Use them when you need to—but don’t overdo it.

Correct use of punctuation is vital when creating text-based content of any kind. But beyond that, it’s good practice to use punctuation—specifically, exclamation points—to convey the value of your offer. As this series of A/B tests from WordStream shows, the use of an exclamation point can absolutely be the difference between a winning ad and a so-so one.

(Remember that you don’t want to overdo it. Again, there’s a fine line between being excitedly promotional and straight-up salesy.)

Symbols (®, ™, etc.) are a great way to communicate a sense of “officialness” in your brand and products. Though it may seem rather inconsequential on the surface, the fact is that attaching these symbols to your brand name within your ads can lead to a whopping 89% increase in conversions.

Finally, while it may seem that including numbers for various purposes (e.g., prices, percent-off sales, phone numbers, and addresses) might seem like an essential part of your ads, the truth is that you don’t need to use them. But you don’t need to avoid them, either. Before we get into this point, let’s be clear:

Yes, major retailers like Amazon do, in fact, use templates and Dynamic Keyword Insertion (DKI) to create Google Ads:

For companies with massive product libraries, taking this approach is all but essential. After all, it would be impossible to create truly unique ads for millions and millions of products. Nonetheless, if it’s logistically possible (and financially beneficial) for you to create individual ads for your various products and offers, you absolutely should do so.

There are two key reasons for this:

First, it allows you to focus on the specific features and/or benefits of the product in question. Even Walmart takes this approach, despite its own massive product library:

Secondly, creating your ads from the ground up minimizes the chances of applying syntax-related errors, typos, and other such mistakes to multiple templated ads. As shown in this thread on Reddit, such mistakes can definitely harm your reputation:

Now, this isn’t to say that you need to start completely from scratch whenever you create a new ad. Still, relying too heavily on templates can stifle your ability to communicate the value you intend to promote with your ads—and can potentially render them valueless in the eyes of your target audience.

No matter how engaging your ad may be, you can’t assume that those who see it will necessarily click through to the accompanying landing page or product page.

While this further engagement is never guaranteed, a strong call-to-action can certainly increase its chances of happening.

Now, there is no universal “best” CTA to use in your Google or Facebook ads. It all depends on the context of your ad from the perspective of your customers. If you’re offering additional content or info, you might prompt your audience to “Learn More”; if you’re directly selling something, you’d use the straightforward “Buy Now.”

In certain cases, you may decide to offer multiple calls-to-action. However, you’d only want to go this route if the prospect’s search intent isn’t clear—meaning they may have any number of needs at the current moment. For example, Zillow presents multiple options for prospects using the general search term “Zillow”:

Notice that in each of the above examples, the CTA is entirely audience-facing. Rather than telling the audience to “click here to learn more,” each CTA assumes the prospect knows to click the link to get something—and skips right to telling them what this “something” is.

The idea is to not waste precious copy on the obvious, instead focusing on the benefits your audience stands to receive from engaging with your ad. That way, they can spend less time reading your ad, and more time actually getting value from your brand.

Both Google Ads and Facebook Ads provide potentially valuable channels on which you can promote your brand.

But again: neither options are silver bullets—and your ad campaigns on these platforms can easily backfire if you don’t approach them strategically.

While there’s much more to creating effective ads on either Google or Facebook, perfecting those various other aspects won’t matter much if your ad copy doesn’t work to attract and engage your target audience.

But, now that you have a better idea of the overarching best practices to adhere to when writing your ad copy, you’ll be in a much better position to work on perfecting the rest. How to Radically Rethink Your Retail App to Increase Engagement 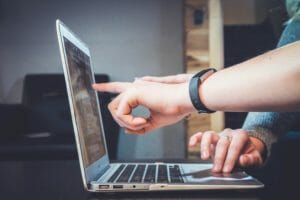 5 Easiest Wins to Increase Revenue with Messenger and SMS Marketing

How to Radically Rethink Your Retail App to Increase Engagement

5 Easiest Wins to Increase Revenue with Messenger and SMS Marketing

What COVID-19 Means For Brands & How To Respond

5 Hacks That Will Blow Up Your SMS Marketing Strategy